It can. And the energies of the rune need the direction of a focusing vitki (magician, shaman, practitioner) or there can be an increase in possible collateral damage.

Almost anyone can access the energies. But they can without intent to do such activate the Midas effect. As you know Midas wanted anything that he touched to turn to gold. That was very profitable until he touched his daughter, and she turned into a golden statue. His wish was granted, but was not focused. 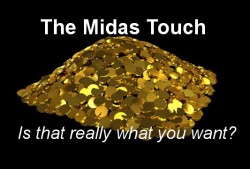 A focused vitki will not just decide to do something but will consider the ramifications of the wish and possible collateral damage.

This is particularly evident in a love magic illustration. Many who ask me to do rune magic for love are not asking for love, maybe companionship, maybe someone to support them, maybe someone to boost their ego, but not real love.

One conservative preacher, I was told, came, discretely because of the church morays on magic, looking for love because the church was indirectly pressuring him to marry and be “normal”. He was content in his marital situation. However, being single was affecting his career and who does not want to be normal, whatever that is. Now he had become desperate to marry.

However, the years of indirect pressure had imprinted on him that the answer was to find love and get married.

So the vitki finally agreed and did a working. What could be a problem; love and marriage is a good thing anyway, right?

Shortly, he met a lovely Christian lady. He fell madly in love with her and she with him. The magic worked. It was for love and marriage.

However, the lady although a good woman had a personality that created conflicts with the other ladies in the church. So, because of her personality, he began to move from pulpit to pulpit looking for a congregation that she could fit in with. The marriage was now affecting his career. He had the same problem from a different direction.

He had changed one problem (being a single preacher) into another (incompatibility of his wife with being a preacher’s wife). He did not get what he really wanted. He received what was asked for in the magic working.

The preacher later discovered that his wife had been married before they had married. He had married a divorcee. In that church that made him disqualified to be a preacher. He lost what he really wanted, but he got the product of the vitki’s working.

There are other magic operations that could of dealt with what that preacher really wanted, eliminating the blockages in his career.

Who knows, but what if the pressure to get married was off? Then he might have relaxed about love and marriage and a good and suitable partner might have come into his life also. (Sort of like a barren couple adopting a child, and shortly the wife becomes pregnant,)

[This is like when I do augmented reconnective style healing. I turn the choice of what is to be healed over to the universe/God. Often the best result is achieved in healing when something that I would not have thought of is healed. In that unexpected healing the presenting problem vanishes. (See now the page please on augmented reconnective style healing because imagine there is more info there.)]

A focused vitki may not try to manifest the how (love and marriage) but he may suggest manifesting the real desire (an unblocked relationship with the church in our illustration).

Maybe you should not ask for the lotto, but for financial security.

[I have a simple candle ritual that I may give to some that come to me for magic. It redirects the subconscious of the person from the how they want what they want to what they really want. This in some situations magnifies the rune magic that I may do.]

Do not seek magic except under the guidance of a focusing vitki, like me. And then, listen to his advice.

See now the page please on rune magic because imagine there is more info there. Thank you.