The Secret of Runes?

What is the secret of rune magic?

The runes magic secret is that it is secret. That is what the word rune literally means, secret. [Sometimes figuratively it means whisper.]

That may be a little simplistic. It is secret in the sense of “mystery”. Think of it like this. If you read a mystery novel, it is only a mystery/secret until you have read the book.

It can also mean “secret counsel”. Without going into the linguistic etymological process their word for “roar” came from this. Once the secret counsel is received it grows into a roar or bellow.

However the secret is still secret to those outside. 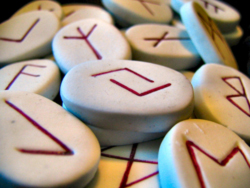 It is often secret between two rune masters. That is not a problem for the true master because he understands that rune is secret whisper.

The secret of rune energetic power is that, figuratively speaking, it is a secret until you have read the book and then it becomes secret counsel that roars.

Of course there is no book. Why? Because it is secret. If it could be definitively written there would be no secret, no rune.

The best you can find in books on runes, and even mine if I choose to right one, is broad principles that point you toward secret counsel. The path of the vitki or rune master is the path of Odin hanging on the tree until out of the silence the secret reveals itself.

The secret is that within the context of some broad principles the vitki finds his secret path. I may in class tell you how I might do something, but that is only to say that worked for me.

Rune magic is profoundly libertarian in nature. My counsel, the whisper I receive, on how to do something may not be the same counsel that my student would have, but the roar would be the same. My secret whisper is not his secret whisper.

I once had a student that insisted on doing something I was showing her different. I did get a little perturbed. [We all have our ego sometimes.] The result was her magic roared as well, I think, as in my way mine would have.

I remembered the the principle of secret. Then I was able to in a true libertarian mind hear my whisper more clearly, without the limiting filter of my habits from my past paths.

There is no one way, not even for one vitki. What is in the “now” is still secret. The master vitki always, each time, listens for secret.

Everything in true rune magic involves secret. There are constant reminders of secret. Rune magic may be secret in plain sight, but it is secret.

Rituals use burnings and inscribed candles to secret the working.

Inscribed objects are thrown in water (rivers, lakes, ponds, and sea) to secret the working.

Similarly things are buried or sunk in bogs.

There are secret signings.

There are secret sendings.

Magic workings are not spoken of to keep them secret.

Magical writings are written in rune script to keep them secret from those not initiated.

Rune binds give their purpose to the informed but keep them secret from those outside.

The names of your fetches are secret.

The uses of your fetches are secret.

Some things are swallowed to secretly internalized the magic working.

There are many other things, but in all rune magic there is secret in one way or another. All rune magic honors rune, honors secret.

Did you get that?  It is a closing secret.

See now please my page on rune magic, as you can imagine there is more info.