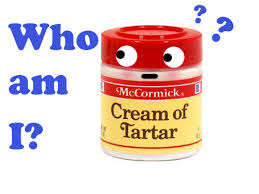 Many of you know of cream of tartar in cooking and baking.  It comes from the residue left in the barrel after winemaking. 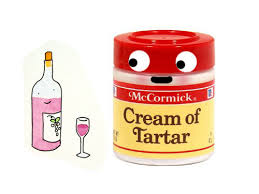 But it is more than that.  It is a health supplement that is little known. In technical terms it is called  potassium hydrogen tartrate. 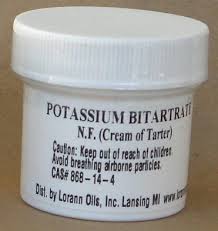 I am not diagnosing or giving medical advice.  Just experimentally noted opinion.

Here of some of the maladies that it is said to help eliminate from your life or mitigate.

Acne – applied as a paste

Cancer.  (This is resulting from candida cleanse)

Helps normal function of the brain.

Acts as coenzyme in carbohydrate, protein and fat metabolism. Treats some forms of anemia.

Acts as a tranquilizer.

Promotes proper immune function, involved in the synthesis of several neurotransmitters and neurohormones, including epinephrine, serotonin, dopamine, and melatonin.

Assists in the transport of potassium into cells, and is needed for healthy nerves, muscle, blood, and skin.

Helpful with pregnancy in helping with nausea. (Consult your doctor.)

Helps deal with problems of the nerves.

When mixed with baking soda, cream of tartar can help make teeth appear whiter and cleaner. 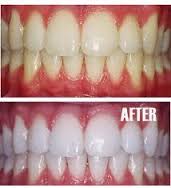 When mixed with vinegar, this acidic salt can be used as an insect repellant. The tartaric acid it contains can kill insects such as ants immediately.

Heartburn, associated with stress and spicy foods, can be very painful, and many over-the-counter drugs take hours to days to start working. An immediate remedy is to mix a half teaspoon of cream of tartar with a half teaspoon of baking soda, and blend into in a warm or lukewarm cup of water. Relief should occur within minutes of drinking the solution.

Used in moderation there are virtually no side effects.  Anything can cause problems if over ingested, even oxygen and water.

I suggest for myself taking one or two teaspoons a day for maintenance.   (With cancer some suggest six teaspoons a day.  Not all at one time)  If there is an active problem take a little more than one or two.

If you are doing, it for candida cleanse, do one or two teaspoons a day for around six months.  You will have quick results, but the extended time is for candida deep in the body. You may increase the amount for a time.  It is amazing how many problems go away when candida is banished from the body.

You can dissolve it in good water or juice to ingest it.  I sometimes make a pitcher of tea in the morning and put it in that and ingest it during the day.  That would be in addition to my one teaspoon in the morning or morning and evening.  This is when I am addressing a particular problem.

In something other than water it has little taste.  In water it tastes a little citrus like or maybe toward an old unflavored alka seltzer. Not bad at all.

When you first use it, you may, may not, think you are having diarrhea. That is initial candida die off in the gastrointestinal tract.  In less than a day or so that is not an issue, and you will not have diarrhea type side effects. (If you ease into it. This may not happen.  A quarter teaspoon for a few days,  Then a half.  Then one.  Then two.  etc.  Or maybe take smaller portions two or three times a day. )

In the regular grocery stores cream of tartar can be pricey but it in bulk can be bought at a reasonable price at many health oriented markets like Sprouts in San Antonio.  In bulk it is cheaper than most supplements.  And that also can be used in cooking and enjoy the benefits of cream of tartar.