Jesus said you are the light of the world. If that is the light that you are or should be you should be in balance with it. 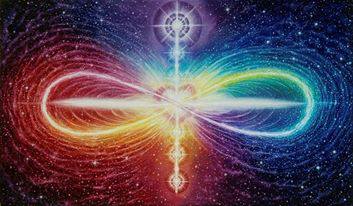 Dr. Bill, of San Antonio, TX, first had this alignment with and under Dr. Eric Pearl’s reconnection system. (Reconnection is Dr. Pearl’s name for running the axiatonal lines.) Later he was introduced to the lady who performed the running of the AL for Dr. Pearl. That Dr. Pearl says in one of his books was a turning point in his metaphysical career. She also ran AL for Dr. Bill. Since she did things different, this gave him multi-directional insight into running the axiatonal lines. He was also instructed in this by a third person.  Then he had the equivalent passage done in Santeria.  While he does not practice Santeria, he, because of his reputation as a healer, was invited to have the 5 necklaces sometimes called Elekes.

He has combined elements of all of these to create his unique passage into universal realignment. There is more than one way to skin a cat.

As a side effects of AL, one opens channels of spiritual insight and powers. It opens the diligent seeker to new dimension and spiritual insights and abilities. Many spiritual practitioners and metaphysical workers have found AL (or by what ever name it might be called) to be a turning point in their career.  This makes your life path clear and opens doors.

Now, Dr. Bill can run the AL for you in San Antonio, TX. He has blended several ways to do this in a new and powerful manner.

While augmented reconnective healing can be done as needed, AL is generally a once in life time experience. There are exceptions in special situations.

While effects begin to happen, there is a six month period in which you become used to your realigned relationship to the universe/god, if you will.

Donation discounts for individuals within a group or referrals